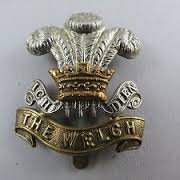 Although he was not a local man, William Whittall had been sent to work at Staveley Works by the Ministry of Munitions. He was knocked down and killed by a train near Staveley Town Station and is buried in Staveley Cemetery.