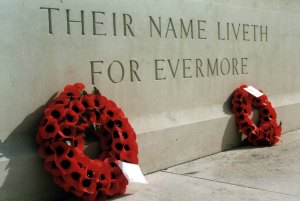 Pupils from Barrow Hill Primary Academy visited Etaples Military Cemetery this morning and reflected on those who lost their lives during the Great War.

Thomas was the son of William Crofts, a former licensee of the Elm Tree Hotel. Before the war, Thomas worked at Staveley Works. 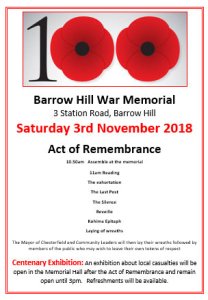 (from Barrow Hill Community Trust) As trustees, we are honoured to be the custodians of Barrow Hill Memorial Hall, the legacy to the communities of Barrow Hill and Hollingwood in memory of those who lived, fought and died in the Great War.

Please join us at the war memorial for a simple Act of Remembrance led by Sergeant Taylor, Coldstream Guards, followed by the laying of wreaths by local community representatives and tokens of respect from other members of the public.

If your group or organisation would like to lay a wreath, or if anyone is willing to help as a steward for the road closure, tidy the memorial garden or make refreshments on the day, please contact us.

An exhibition about local casualties will include displays and artefacts and will be open after the Act of Remembrance and remain open until 3pm.

He is buried at the Cologne Southern Cemetery where more than 1,000 Allied prisoners and dozens of German servicemen were buried during the First World War.

Remembering two local lads who both died on 14th October 1918.

As the allies pushed forward in the last 100 days of the war, casualties were heavy. On the centenary of their deaths, Staveley remembers……