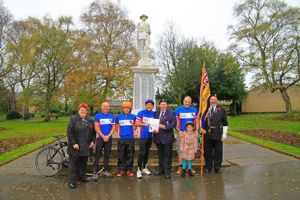 Marion Gerrard, John Wallace, Danny Brown, Mick Hind, Joe Roberts, Craig Ashley, Beau Ashley and John Gerrard are pictured in the Staveley Memorial Garden when Joe presented the cyclists with a certificate of recognition. A sponsored ride visiting 145 graves and Memorials to plant a wooden poppy cross on each raised over £1,600 with Beau contributing £80 from a stall at the Armed Forces Event. The total amount has been contributed towards the Royal British Legion Staveley and District Branch Poppy Appeal. Marion and John provided back up for the group when they paid tribute to some of those who fell in WW1 from the Chesterfield area. Thanks also to those who were unable to attend the presentation. YOU DID NOT FORGET.